“Bearing My Cross:” I’m A Chaste Male…Why I Won’t Have Sex Unless Married

What, You Have Given Up Sex!

In the Prodigal Son parable in the gospels, I have always related to all 3 main protagonists.  We have all been the actual Prodigal Son living a life of disrepute in some point in our life.  At other times, we are the understandably upset older brother who is angry that the father receives him without hesitation, wondering why he wasn’t rewarded for being the stalwart son who didn’t squander anything.  And as a father, I relate to the father, willing to forgive all offenses to have a child back in my life.  Now we can make the assumption that part of the Son’s wayward ways is that he paid for prostitutes.  I never did that.  But I wasn’t the most impeccable son of Christ.  I wasn’t a chaste male.

Today I’m a chaste male.  For much of my adult life, I was a wayward child.  I wasn’t necessarily a bad kid at all.  I was never grounded in my adolescent years.  As many of you who have been long-time followers of NPE, you know that I was a fat kid and that probably prevented me fully from delving into vices that I otherwise might have succumbed to.  By the time, I lost my weight at age 17, I was open to being intimate with women in a way I never thought I would have the chance to do.  After all, most fat kids think they will never kiss a girl, much less have a family one day. Check out Confessions of an Obese Child series.

For much of my college years, I waited to lose my virginity.  I legitimately wanted to lose it with a woman I loved.  I dated girls but neither had the “game” or “mojo” to score. Nearing my 21st birthday, I changed my tune for I didn’t want to be one of those losers who is a virgin until…..wait for it….40!  (Admittedly this was back in the 1990s.)  So I lost it….we will keep it vague.

Eventually I had sexual partners, some of which resulted in nothing, some of which resulted in long-term serious, loving relationships.  As a cradle Catholic Christian I knew the church’s teaching on sex outside of marriage and the bible verses that supported such an exclusion.   I attended church weekly, prayed all the time, but like many men and women of the day, “the spirit is willing, but the flesh is weak.”  Looking back I think I just hedged my bets that I wouldn’t die young so I would have time to repent and end up in a sacramental marriage where the sex is unitive and procreative.  I did that…and later was divorced.

Post-divorce I essentially returned to the college ways of trying to get laid in as little dates as possible.  I was in denial.  I knew it was wrong, but….  Women today make it so easy for men to get laid.  The “sex positive” movement has essentially turned women into men in that they are giving it away in a few dates.  Now I doubt this is good for women, but who was I to complain. 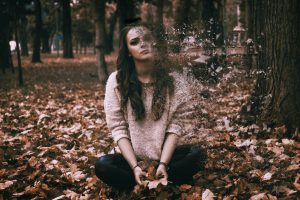 Sex Liberation has only raised in depression in women

A few years ago, I had a paradigmatic change in my view of this licentious lifestyle.  “How could I deny the Bible’s teaching on fornication?”  I couldn’t any longer.  I had a girlfriend at the time who was pretty virtuous.  We were taking out time to get to the point of having sex.  And I think there was a reason for that.  My conscience was telling me to no longer do it.  I didn’t want to live in cognitive dissonance, knowing that sex outside the confines of marriage is illicit.

And let’s be fair, if people resorted to the way it used to be in “the day” we would have less societal issues.  If both men and women were chaste until marriage AND stay married, we wouldn’t have broken families and broken children…and God knows the welfare state would be a lot smaller benefitting EVERY American taxpayer.

Now some would say “Gregory, you are so old-fashioned!”  That it is a good thing that marriage rates are down, co-habitation and illegitimacy rates are up.  Perhaps microcosmically this is true for the “Don Juan” but for society it has been a nightmare.  Women feel objectified and used, STDs are rampant, illegitimacy is up to 50% minimally in the white race and up to 75% in the black community.  We could all benefit from chastity.  And let’s be honest, no one wishes their daughter is sleeping with the entire football team.

So two years ago, I told this girlfriend that I was giving up on sex unless I was married.  This was hard for me, but I think it was hard for her as well.  We eventually broke up with no hard feelings.  I sympathize with her.  Most girls today want to have a boyfriend to have sex with and I kind of pulled a “bait and switch.”  I wish her the best.

Will I have sex again?  Only if I am married. And I’m OK with that.  Being a chaste male is a cross to bear, but a good one.  I offer up this sacrifice, this “suffering” to bring me slightly closer to Christ’s suffering.  Being chaste is counter-cultural but pro-Kingdom of God and I will take the latter any day.  Time on this Earth is a blip of time compared to eternity.