Should We Be Worried About Fluoride In Steam Rooms?

Naturopathic Earth has spent a considerable amount of time with our friend, fluoride. We have two NPE Radio episodes as well as two articles detailing its history and effects on the body for example. And why shouldn’t we? Fluoride is in the water of most cities. But is also in a hosts of food products. Not just soups and other water-based liquid foods, but many processed foods are prepared on some level of production with water. Water that is laced with fluoride. Should we be worried about fluoride in steam rooms?

I would recommend you click HERE to read on the history of fluoridated water and HERE to learn of the pernicious effects of it on the body. 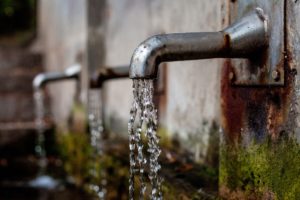 In short fluoride was put into the water supply through outright lies and duplicity. Big Business of the 1930’s essentially bribed and/or colluded with the scientific and educational communities to doctor data showing how fluoride was good for our teeth. It bought off the American Dental Association and politicians to give this maniacal move gravitas. Later through millions of dollars of ad campaigns over decades of time it has been inculcated into the minds of all Americans that fluoride is harmless, and even more insidious, a champion of public health.

Independent studies have showed a different picture of fluoride. Its destruction of bones, its correlative rates of infertility, its neurotoxic effect to the point where it lowers your IQ have been well-validated. (If you don’t believe me, ask Harvard. It released a study years a few years back demonstrating fluoride’s effect on a child’s mind.)

Click HERE to review how destructive fluoride is to the body.

Studies show that most fluoride exposure occurs when showering, especially those long, hot showers that we all love. The aerosolized form of it is absorbed much quicker by the body through the lungs than through the circuitous route of the digestive system. This is why it is extremely important to install a fluoride shower filter in addition to the one for your drinking water.

So should we be worried about fluoride in steam rooms?

The reason I wanted to review the fluoride question is because of an epiphany I had a few weeks ago at the gym. I have mentioned in my NPE Radio episode on Biohacking Your Exercise that I love the steam room. I try to steam around 5-6 times a week, even on days when I have sweat through cardio workouts. I love the way it makes my body feel during and after. Sweating is crucial to the body in the release of toxins that we accumulate throughout the day.

I struck up a conversation with an amateur MMA fighter in the sauna one day. I normally don’t spend any time in the sauna since it takes me five times the amount of time to work up a sweat in them than the steam room. But for whatever reason I was in there and I casually asked him about infrared saunas, the new fad in the biohacking world. We later talked about cryotherapy, floatation therapy, and other topics.

I asked him “Hey, I’ve never seen you in the steam room.” He said “No man, you wouldn’t catch me in there. I worry about the hygiene.” This is a normal preoccupation with steam room. Many of them are not well-maintained. In particular, many are not cleaned nightly which turns your cathartic steam room into a harbinger of pathogenic growth. Luckily, my gym cleans the steam room nightly and maintain it well.

I explained that to him. He said “Great, but you’re still inhaling loads of fluoride.” I felt like a freight truck hit me. Or perhaps more accurately, I felt like Isaac Newton sitting under the apple tree when the apply fell on his head illustrating the concept of gravity. Of course! How did I not see this?! My love of steaming blinded me to the simple fact that the gym likely used the fluoridated municipal tap water of San Antonio to steam the room. I was inhaling fluoride every time I stepped into my steam room.

Now I make a concerted effort to be a fast bather. I’ve always taken quick showers. Not because of the fluoride per se but rather because I don’t see the point in spending loads of time showering. The pragmatist in me thinks “You get your body wet enough to lather up some soap, lather up, and then rinse off.” I am aware that many women love to take long showers and I totally understand the relaxing effects of one, but it just isn’t me.

So after this man shattered my world, I began to rationalize. I told him “I never thought about that! I know about the deleterious effects of fluoride, I have even podcasted about. You are blowing my mind!” I then told him “Maybe they have installed a fluoride (and chlorine filter) onto the steam room mechanism.”

Now I don’t know anything about how steam rooms work so deep down I was really incredulous that a steam room fluoride filter even existed given that Big Business has so brainwashed people into thinking that there is nothing wrong with fluoride. So even if one existed, why would the gym purchase steam room apparatus that removes fluoride?

I had to find out the truth. So I went and asked the manager of the gym as well as the man who cleans and maintains the steam room. Due my chagrin, the steam room didn’t have a specific filter to remove fluoride. The steam room maintainer was perplexed when I asked him if it had a filter that specifically removes fluoride.   Because of course, he didn’t know anything about this danger.

I told my other gym acquaintances as well and like with all good “conspiracy theories” they just nodded their heads and ignored me. With most people, the denial is deep. I could tell them about the Harvard IQ study, I could tell them to read the actual unclassified paperwork from our dear, paternalistic government, but it still wouldn’t make them rethink fluoride. Why? Because it is so hard for most people to believe that insidious people exists who are not looking out for our well-being. 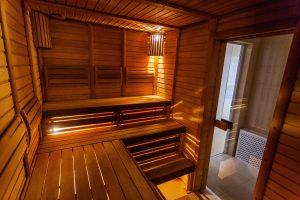 The Sauna Is A Must-Have To Reduce All-Risk Mortality…Plus It’s Relaxing.

So now I’m in a quandary. I love to sweat. I could continue to sweat the old-fashioned way by doing light cardio and the occasional sprint. But in the winter sweat is hard to manufacture unless I layer on 6 t-shirts. So that leaves me with the sauna or the tainted steam room.

I’ve tried the sauna many times in my life. It is uncomfortably hot, but I could spend 30 minutes in there without sweating much. The MMA man says that the sauna is better because it heats up your body internally rather than steam rooms which warm up the air. Or I could return to the steam room and hedge my bets about the fluoride absorption.

I started brainstorming. “Maybe I could steal a mask from the hospital to which I take my Clinical Rotation high school students and wear one in the steam room?” “If not, maybe I could just put the towel over my mouth to block the seemingly microscopic fluoride particles from being inhaled?” “Or maybe I should just suck it up and not overthink it?”

Will the thought of fluoride in steam rooms alter my life?  What I eventually came to was that steaming is one of the simple pleasures in my life that get me through the day. I really don’t know if wearing a mask would make a difference. Either way, I just can’t give it up. Sure, maybe I’ll spend 10 instead of 15 minutes in the steam room and use the other 5 in the sauna, but I can’t give up the steaming. I love the steam room!

I won’t rationalize it. I won’t fall into Cognitive Dissonance. I know I’m inhaling fluoride, chlorine, radon 222, and who knows what other toxicants, but the mental and spiritual benefits of steaming supersede the physical ones. At least that is how I’m going to spin it for the foreseeable future. Fluoride in steam rooms dilemma will continue in my head.

Learn About How Saunas Cut All Types Of Death by 66%

#86: The Connection between Smoking and Mental Illness

#87: The Raw Water Fad: A Fluoride-Free Alternative or Poop-Laden Disaster?

You made some decent points there. I looked on the internet for the issue and found most individuals will go along with with your website.

It’s a shame they don’t put fluoride filters in the steam room. Recently, I’ve been using the sauna more since the benefits are more impactful. Thanks for sharing!!

Steam distillation separates fluoride etc. from water, would this not also be true with the steam in the steam room?

Hey E., not to my knowledge. I believe we are still inhaling it. I’ve asked people who maintain steam rooms at various gyms in the large city I live and all state that filtered is not removed. No studies, just anecdotal. Cheers, Mate.

Admiring the persistence you put into your site and detailed information you offer.
It’s good to come across a blog every once in a while
that isn’t the same unwanted rehashed material. Great read!
I’ve bookmarked your site and I’m including your RSS feeds to my
Google account.

Genuinely when someone doesn’t understand afterward its up to other people that they
will help, so here it occurs.

For most up-to-date information you have to go to see world-wide-web and on the web I found this web
page as a most excellent web page for most recent updates.