Which Fish Have Mercury? The Easiest Clean Eating Guide to Reducing Your Mercury Toxicity

Let’s get right to the point.  The benefits of fish is well-documented.  Fish & other sea life are:

Fish, along with the occasional, clean meat and poultry, are part of a great well-balanced diet.

{Read our article on Big 3 toxins to avoid.}

Surprising to many a large majority of the fish we consume in America is tainted either because it is caught in polluted waters or is farm-raised.  To worsen matters China, Vietnam, and other Asian nations are the largest purveyors of these farmed fish. The fish are typically raised there, frozen, and then shipped over.  Unfortunately, the sea life and livestock standards of these foreign nations are suboptimal compared to America.  They are born, raised, and confined in unsanitary ponds.  As a result, the filthy fish which we consume poses health risks.  T 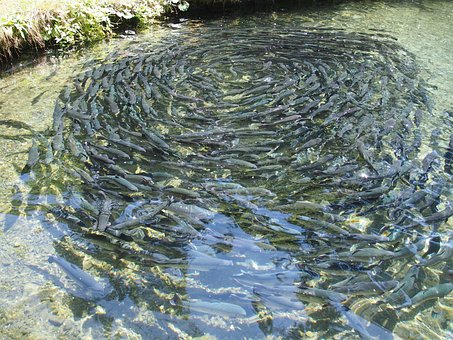 o add insult to injury, the estimates of the radiation fallout of the Fukishima in 2011 and its effect on Pacific sea life has been largely under reported.  Nevertheless, the major problems with farm-raised fish are:

Is Mercury A Problem?

High levels of mercury is an issue.  Mercury is a well-known neurotoxin which severely debilitates the body and may prove fatal.  The good news is that most fish don’t retain large amounts of mercury.  And even those that do, selenium, an anti-oxidant, is found in large amounts in these fish.  Selenium serves as an quasi-antidote to the toxicity of mercury.

{Read our Items to Purge From Your House Now: Vegetable Oils, Food Dyes, and “Liquid Cancers.”}

Resources exists to help you make informed decisions to which sea life to consume.  For example, the Environmental Defense Fund (EDF) releases a Seafood Health Alerts illustrating the maximum number of safe servings of  a given marine life.  The Environmental Working Group (EWG) also boasts a helpful app to help guide you in the seafood department. Well, which fish have mercury.  Here at Naturopathic Earth we offer a quick guideline to help you make easier, faster choice at the grocery store.

The following fish are safe to eat in large amounts

The following should be eaten in moderation:

The following should be consumed infrequently.

Fish Guideline: Eat (in this order):

Stay away from (in this order):

Overall the best fish to consume, which are high in nutrients but relatively inexpensive are:

Seafood is such a nutrient-dense source of food.  If the price of wild-caught fish is price prohibitive, then continue to purchase farm-raised.   It should not be avoided due to pollution issues. But inexpensive, low-toxin fish do exists as mentioned above so develop a taste for them.

Make good informed decisions as to the source of the food.  Ask the clerk behind the counter or look at the placards next to the food to learn its origin.  Try to buy fresh, wild-caught.  And preferably not canned since it is laced with BPA (most canned good in America are lined with BPA.)

A. Gregory Luna (call me Gregory)

(We would appreciate your comments below!) Benefits of Cryotherapy, The “Hot” Biohacking Sensation Sweeping the Country

Thanks to my father who informed me about this web site, this website is in fact awesome.