As a child of the 80’s my most familiar encounter with Strawberry Shortcake was the girl’s cartoon.  My mother was an immigrant from Mexico and as such she rarely baked aside from ready-made cookie dough mix.  To be honest I probably did not indulge in a strawberry shortcake until my high school years.  But to be fair, they are exquisite.  That is why we are presenting our own Gluten/Dairy-Free Paleo Strawberry Shortcake Recipe.

Why a Gluten/Dairy-Free Paleo Strawberry Shortcake Recipe? Because the crux of this dessert is fruit and we like desserts whose framework is mostly fruit.  Think of blueberry pie or cobbler or our recipe of Raspberries with Homemade Whipped Cream.  Also strawberry shortcakes, when prepared well, taste fresher, lighter, and sunnier than other desserts.  Indeed, when you think about them you think about hot days by the beach or bay.

Why gluten-free?  As anyone who reads our Naturopathic Earth recipes you know about gluten-sensitivity.  Gluten, an antinutrient protein found in most grains, is potentially inflammatory to the body.  Celiac Disease is an auto-immune disorder in which our immune system attacks the cells of the small intestine responsible for absorption anytime one eats something with gluten.  To be honest, Celiac is rather rare with maybe 2% of the total population suffering from it.

But gluten-sensitivity is another issue.  Some studies suggest that up to 65-70% of the American population suffer from some sort of negative reaction to gluten.  Classic symptoms of gluten-sensitivity include “brain fog” (inability to concentrate), abdominal pain, flatulence, overall digestive problems, and join pain.  Most baked goods are made from wheat flour which is why it is best to eschew it.  (Read our Review of the Best Non-Wheat Flours to see which is ideal.)

The other benefit of avoid wheat flour is that you will likely lose inches from the belly.  This diminishment is partly due to the reduction of inflammation in the belly which will shrink your waist line.  Also flour is rather nutrient-deprived and yields a lot of wasted calories.

In general, we should try to avoid all the packaged, middle aisle foods to have optimal health and stick to fresh foods that God made like produce, nuts, seeds, and animal products.  But at the least rid your house of flour and use a non-wheat flour alternative.

So in this Gluten/Dairy-Free Paleo Strawberry Shortcake Recipe we use almond flour as the base cake ingredient.  We throw in some other healthy ingredients like cinnamon and coconut oil.  We use cane sugar as the sweetener but if you prefer you can use the gold standard of non-sugar sweeteners, Medjool dates.  (Check out our Review of non-Sugar Sweeteners.)

Let’s focus on the strawberries.  Strawberries, when ripe and fresh, are magnificent and lithe.  The issue with conventional strawberries is that they are loaded with pesticides, like glyphosate which is linked to cancer and hormone disruption.  Indeed, strawberries consistently score on the Environmental Working Group’s (EWG) annual Dirty Dozen list of most pesticide-laden produce.  Our suggestion to you: use organic strawberries.

Let’s look at the cream in this Gluten/Dairy-Free Paleo Strawberry Shortcake Recipe.  No dairy here.  Why?  Dairy is another agent that causes inflammation in the body, especially dairy that contains high amounts of lactose and casein.  Cow milk does…Greek yogurt doesn’t.  Here we use nutrient-dense full-fat coconut milk with vanilla extract for the coconut buttermilk (Click HERE to read our review of non-dairy Milk alternatives.)

For the whipped cream, click on the caption below of the Raspberries with Whipped Cream recipe picture. Again, it is dairy free and full of beneficial fats.

Purchase some of these ingredients on Amazon right now.

Eat this strawberry shortcake on a summer day, a breezy autumn evening, or a cold, cloudy Winter morning where the strawberries bring a dollop of much-needed sunlight. 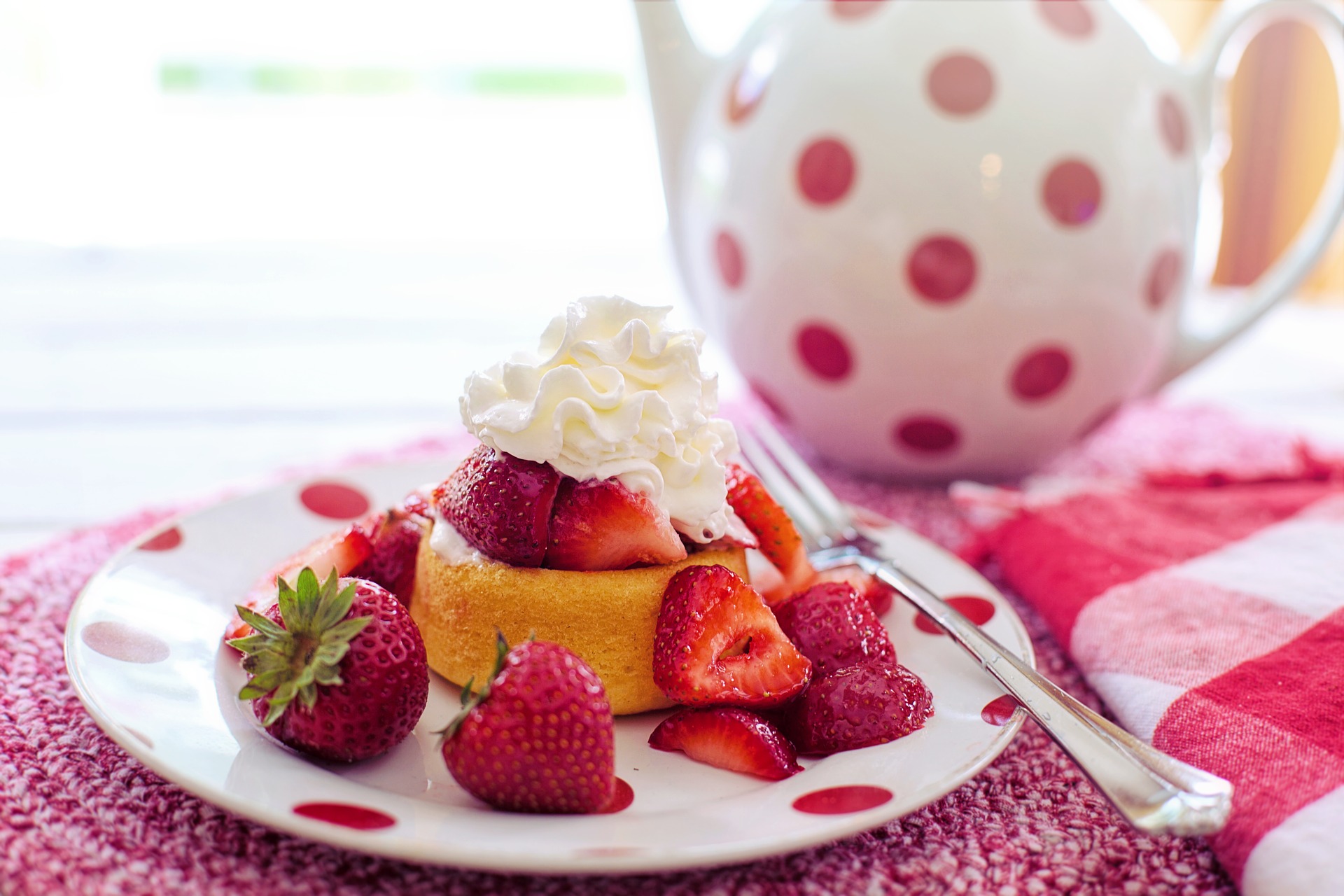 In a small mixing bowl, mix in cream ingredients of coconut milk, lemon juice and vanilla extract and stir.

In a large mixing bowl, add the almond flour, cinnamon, cornstarch, cane sugar, sea salt, and baking powder and whisk to combine.  Put the coconut oil on a small pan, warm to melt it into a liquid form.  Pour into the shortcake mixing bowl and mix.

Add 3/4 of the coconut milk mixture into the shortcake mixture and stir to combine well.  It should come out semi-sticky doughy. (If it looks too wet, add a tablespoon of almond flour; if it looks to dry, add more coconut milk.)

Transfer the dough onto a well-floured surface.  Form 1-inch-thick cakes.  (Use a cookie cutter to cut our circles if you are having problems making them circular.)  Move the cakes to the baking sheet.

Brush the 5-6 cakes you made with coconut milk or oil to give them more of a crust.  Bake for 20 minutes until outside is crisp but inside is still soft.  Check often.

While cooking, prep the strawberries.   After you have sliced them, sprinkle stevia or cane sugar onto to it.

Prepare the Keto Whipped Cream.  Follow the recipe above in article.