We are in the midst of the winter doldrums. January is characteristically the coldest, darkest, most depressing time of the year. We suffer from “January Blues” partly due to low Vitamin D levels, the stress of Christmas bills coming in, less exercise, more alcoholic and junk food consumption, marital discord and more. Learn how to Remedy the “January Blues” by clicking HERE. One way, albeit a minor way to offset these blues, is to eat nutrient-dense, warm soups. Let’s talk about our Keto, Paleo Pumpkin Soup!

So why this Keto, Paleo Pumpkin Soup? First of all, it is important to eat as much vegetables as possible. We are supposed to consume 5 servings a day. Now most people don’t get to even half that amount unless you count the potatoes in their French fries; nevertheless, it is even more important in the winter months when we crave those comfort foods.

We have a natural gravitation toward soups in the winter months since time immemorial. This makes complete sense, for it warms the body as we ingest it. Now many soups can be nutrient-lacking full of MSGs and sodium in general, such as cheese soup or even the venerable chicken noodle soup. The beauty of vegetable-based soups is that you are injecting much needed phytonutrients and fiber as well as warming up the body and soul.

Let’s look at the actual ingredients of the tasty Keto, Paleo Pumpkin Soup. In particular the ones which make it relatively high-fat or keto. We start with full-fat coconut milk. You can opt for either refrigerated unflavored or BPA-free canned variety. (I would choose the latter for its higher fat content.). Coconut Milk is loaded with saturated fat and protein which will bring satiety as well as a smooth consistency to your Keto, Paleo Pumpkin Soup.

Read our Non-Dairy “Milk” Review To See if Almond, Coconut, Or Soy Wins Out.

The chia seeds are a Naturopathic Earth favorite. Chia seeds boast a great source of monounsaturated fats as well as fiber to any meal. They are truly chameleons in that they make more aesthetically-pleasing but bring no discernible taste.

Bone broth is a favorite in the primal/paleo world. It is much more nutrient-dense than traditional store-bought chicken broth plus lacks the neurotoxic monosodium glutamate. What is it?

Bone broth is broth which comes from the connective tissue and bones of animals, mostly cows and chickens. By drinking the broth, you are ingesting the proteins, enzymes, & minerals in the bones. Aside from having numerous minerals, such as potassium, zinc, iron, and magnesium, bone broth contains collagen. Collagen is a crucial protein responsible for maintaining optimal skin, hair, ligament, tendon condition, among other things.

Aside from the aforementioned, bone broth is great for those with “leaky gut” syndrome so commonly seen when eating gluten. It is also known to help with joint pain, build healthy bones, reduce chances of cardiac events, and strengthens the immune system. You should really try to ingest bone broth at least twice a week.

So we got the fat from the coconut milk and chia seeds and we are getting superfood nutrition from the bone broth, let’s look at the some of the noteworthy spices of this Keto, Paleo Pumpkin Soup. Cinnamon is one of the most powerful agents in the world. In short, it is fabulous for insulin resistance, fighting pathogens, heart health among other things. Click HERE to read our article on The Wonders of Cinnamon.

Ginger is another potent weapon in the arsenal of botanical medicine. Perhaps most famous for digestive ailments (think of ginger ale and ginger bread) this root is also a fabulous cancer-fighter/antioxidant. Click HERE to read more about Ginger.

Garlic completes the “Holy Trinity” of botanical wonders. Garlic is simply the most potent antimicrobial fighter in the world. When you are getting sick, take garlic in any form. It’s also a wonderful antioxidant fighter and heart health preserver.

Check out our Holistic Health News podcast episode on Most Powerful Spices In Your Pantry.

What About The Pumpkin?

We can’t forget the key ingredient of this Keto, Paleo Pumpkin Soup. Pumpkin, or at least the pumpkin we consumed canned, is not really the same pumpkin from our doorstep. It is a squash but not pumpkin per se. The canned pumpkin still is higher in phytonutrients, fiber, and phenomenal levels of Vitamin A (and decent C as well). Plus pumpkin exudes a great visual look and aromatic allure.

Garnish this Keto, Paleo Pumpkin Soup as you like. I recommend adding roasted pumpkin seeds since pumpkin seeds are arguably the most nutrient-dense seed in the world (behind our Aztec friend the Chia). But also throw in a dollop of sour cream and some crusty bread. Just don’t tell our Paleo friends. It will be our secret…..

Check out these ingredients now! 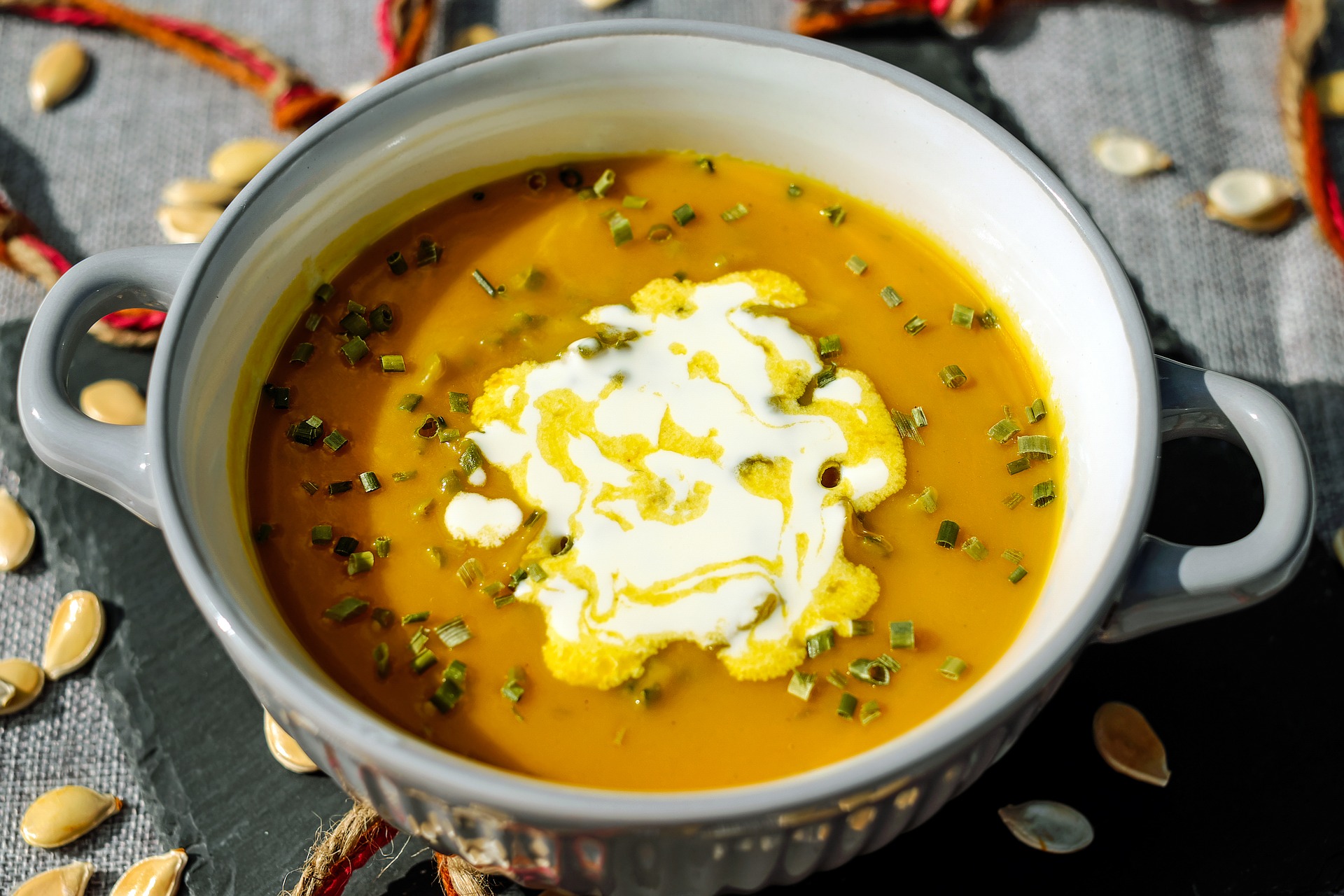 Stir and let mixture simmer for 15 minutes. (If using fresh pumpkin, blend prior to adding to guarantee smoother consistency.)

How thick or thin your pumpkin soup will be is up to your preferences. If you want it thicker simmer on medium low instead of medium heat uncovered.